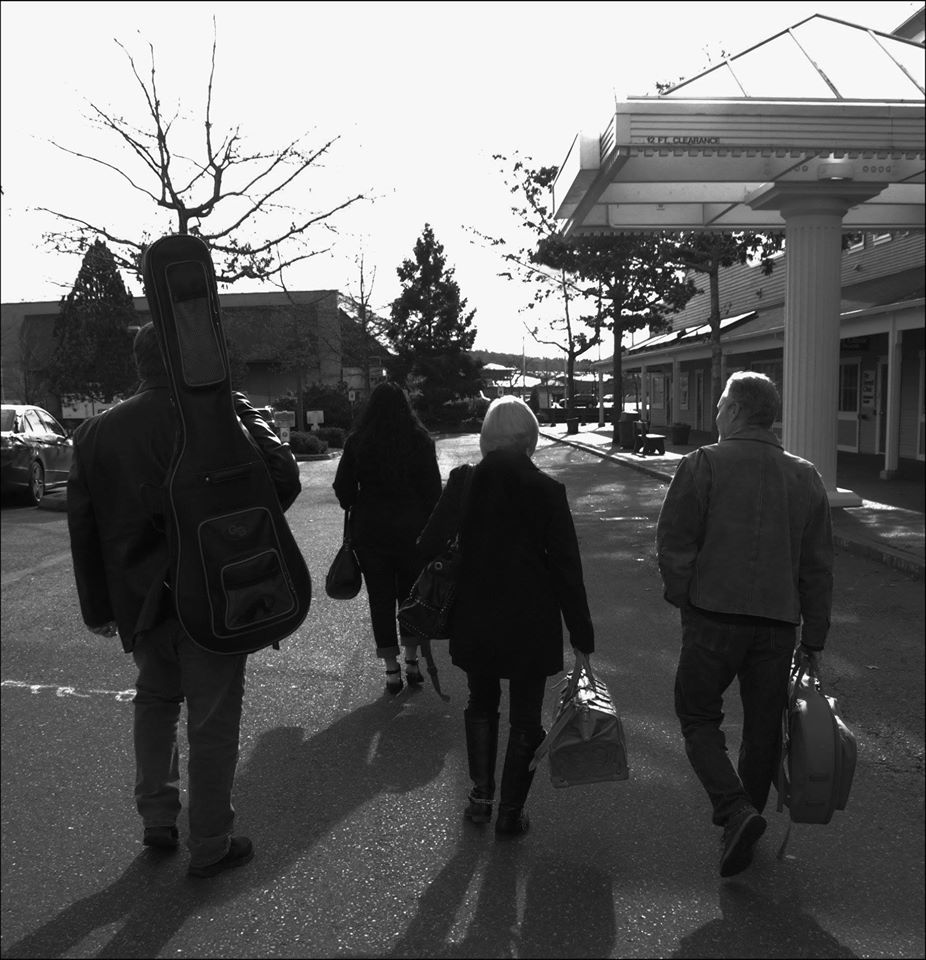 In March 2017, Travelin’Light rose from the ashes of another band with determination and a goal to satisfy our passion for music and a chance to transport our audience to a time when life was a little more carefree.  If we can bring back some memories, tempt you to sing along and make you smile, then our mission is accomplished!   The original members were Jackie Gauthier-Brown, Dave Martinson and Monica Moriarty. In the Fall of 2017, we added a drummer who loves to play bass and who was a bandmate of Jackie and Dave in the past. Enter Jim Price who has brought not only the wonderful sound of the bass, but a lot of talent, wisdom and humor to our group.
Jackie Gauthier –Brown was that “hairbrush for a microphone” kid that did shows, lip-synching to Disney records while her poor parents sat on the couch, tolerating her performances!  Her first voice lesson was from her father, who was very much into barbershop quartets and community theater.  In his world, four daughters meant instant harmonies. Her high school “girl band” was two sets of sisters and they had a corner on the market for weddings and ladies’ tea. Her first formal voice lessons were in college.  From there it was rock bands, wedding singer, studio work and acoustic performances. She had the opportunity to study under some fabulous teachers. Jackie’s rich sound and passion for music is the foundation of Travelin’ Light.
Dave Martinson has lived a lifetime of music. He grew up singing at the piano while mom played and sang. He started playing guitar and singing in church weekly at age 14. He played in his first rock band in high school and went on to play at college coffee houses and weddings beginning in the 70s. He was part of the Park City music scene during the 80s & 90s and has played in various local bands ever since. Dave brings the acoustic guitar to life and his vocals are the perfect fit for Travelin’ Light. He sings both lead and harmony as well as playing guitar and harmonica.
Jim Price-Jim started his journey in music playing snare drum in his elementary school concert band. This led to his passion for playing drums which continues to this day. He plays drums in a classic rock band, but his love for music has led him to pursue other musical instruments such as guitar and bass. For the last 7 years he has had the privilege of making music with Jackie and Dave and the past 6 months with Travelin’ Light.
Monica Moriarty was introduced to choir in the 5th grade. She started in concert choir and in high school performed with 2 award winning Jazz choirs throughout high school which also brought the opportunity to sing with the groups in the 1986 World Fair in Vancouver, British Columbia. It was there that she had her first karaoke experience which led to many years of singing in lounges weddings and children raised and time on her hands, she placed an ad to sing back up vocals and harmonies. Jackie responded to her ad and asked for a demo. Shortly after, Travelin’ Light was born. Monica is influenced by many artists including Linda Rondstadt, The Eagles, Barbara Streisand and Patsy Cline to name a few. As a soprano she contributes to both lead and backup vocals and her passion is doing 3- part harmonies.